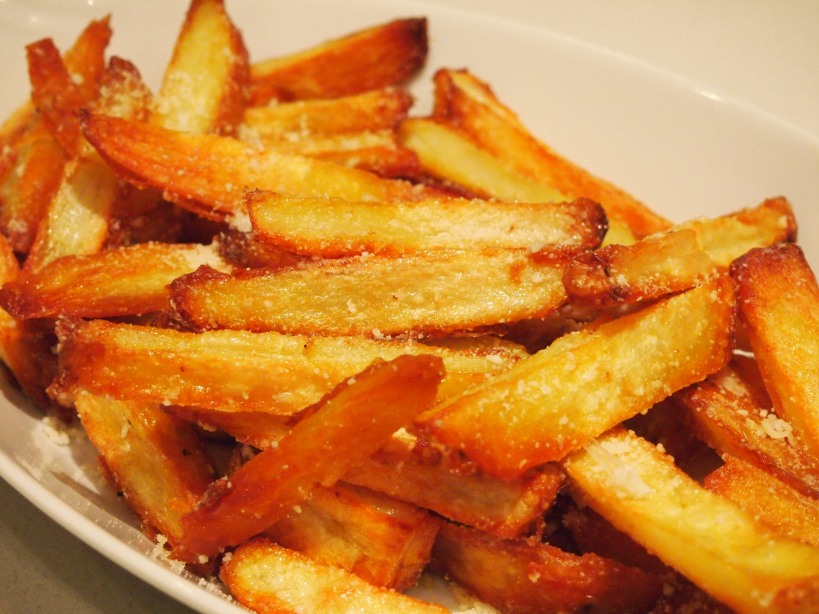 You would swear when tasting these chips that they were deep-fried.  In fact these oven fries have a depth of potato flavour that is often missing in deep fried chips.  The secret to making them so crispy is to pre boil the potatoes first, as you would with roast potatoes.  Up until recently I would slice the potatoes into chips then boil them briefly.  This would yield good results but it was hit and miss – crispy potatoes one time, not so crispy the next.  I’ve now found a foolproof method, boil the potatoes whole and unpeeled until they are just under half way cooked and then slice them.  This prevents too much liquid penetrating the potatoes resulting in perfectly crisp chips every time.  The addition of good quality truffle oil and parmesan as soon as they come out of the oven elevates these from great to amazing.

Method
Preheat the oven to 220C. Put the potatoes in a large saucepan and cover with cold water.  Add salt and bring to the boil and cook for about 10 – 15 minutes or until the potatoes are just under half cooked.  Don’t over cook them otherwise they will be hard to slice.  Once cooked drain and when cool enough to handle slice into finger size chips.  Put your roasting pan in the oven, and allow it to heat up for about 5 minutes.  Add a generous splash of olive oil to the pan, about a quarter of a cup, and pop the pan back into the oven for another few minutes.  Take the pan with the oil out of the oven and carefully add the potatoes and with a spatula gently toss the chips to coat them with the oil.  Make sure the fries are in one layer and not overlapping. Add a final drizzle of olive oil along with a generous sprinkle of salt and put into the oven. 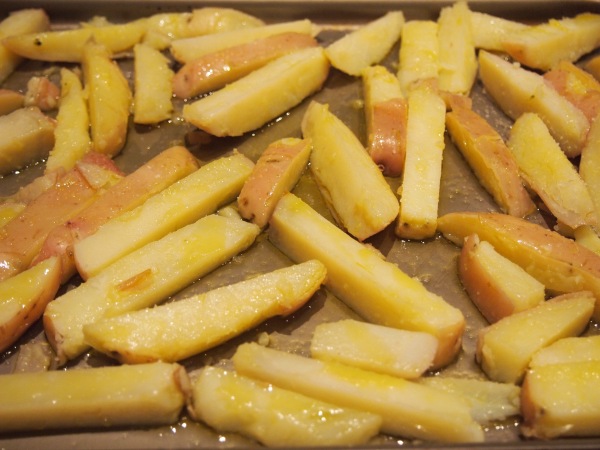 After 20 minutes reduce the oven temperature to 200C and cook for a further 30 -40 minutes, depending on your oven.  Basically you want the potatoes to be golden brown all over.  During the final cooking time check the fries and turn them over once or twice to ensure even cooking on both sides. Once cooked remove from the oven and place on a warmed platter.  Drizzle with truffle oil and parmesan and serve immediately. 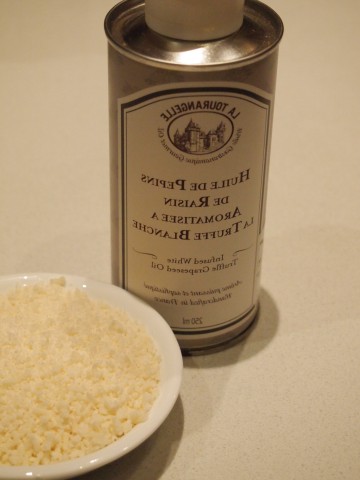