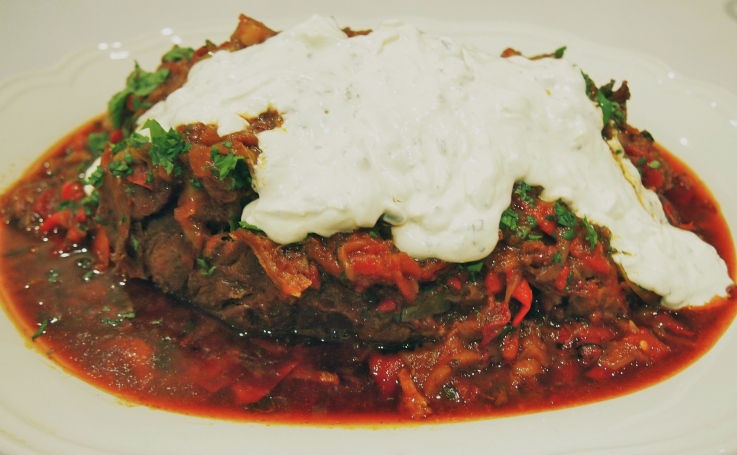 This is a recipe from the Jamie Oliver At Home cookbook and it’s a real keeper.  It’s easy to throw together and whilst the cook time is pretty long it just does it’s own thing in the oven.  The original recipe calls for pork shoulder but for some reason this cut is particularly hard to find here so I used pork collar butt – pork neck or scotch fillet would also work. The nice thing about this dish is the meat is not cut up into pieces, it’s left whole, so the final dish when its served up on a platter has wow factor and looks much more exciting than you’re average goulash type stew. The sauce is full of peppers, both roasted and plain and the addition of chilli and caraway makes sure every mouthful is full of flavour. The final step is to add a big dollop of sour cream on top of the meat, this oozes and melts down into the sauce which just makes the whole thing even better. I teamed it with steamed rice and a green salad for a casual dinner party and everyone dived in for seconds, and thirds!

Preheat the oven to 180C. If the piece of pork you’re using has a layer of fat on it, score it in a criss cross pattern and season generously with salt and pepper. Pour a good glug of olive oil into a large oven proof dish that will hold the meat and vegetables snugly. Put the pot over medium heat and when hot add the pork, fat side down. Sear the meat on all sides until brown then remove the pork from the pot and put it to one side. Add the onions, chilli, paprika, caraway seeds, marjoram or oregano and a good pinch of salt and pepper to the pot. Turn the heat down and gently cook the onions for 10 minutes, then add the sliced peppers and continue to cook for another 10 minutes. Add the grilled peppers and the tomatoes. Put the pork back into the pot, give everything a little shake, then pour in enough water to just cover the meat. Add the vinegar and bring to the boil.  Put the lid on then place in the preheated oven for 3 hours. 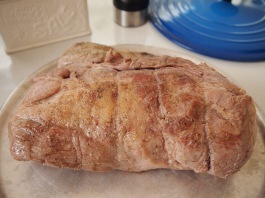 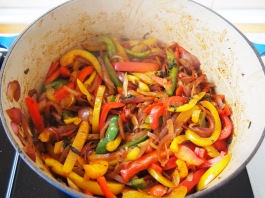 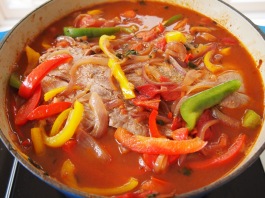 You’ll know when the meat is cooked as it will be tender and it will break up easily when pulled apart with two forks. If it’s not quite there yet, put the pot back into the oven for a little longer. Stir the sour cream, lemon zest and most of the parsley together in a little bowl. When the meat is done, take the pot out of the oven and taste for seasoning. Carefully place the meat on a large deep platter sprinkle with the rest of the chopped parsley and spoon over the sour cream mixture on top of the meat. 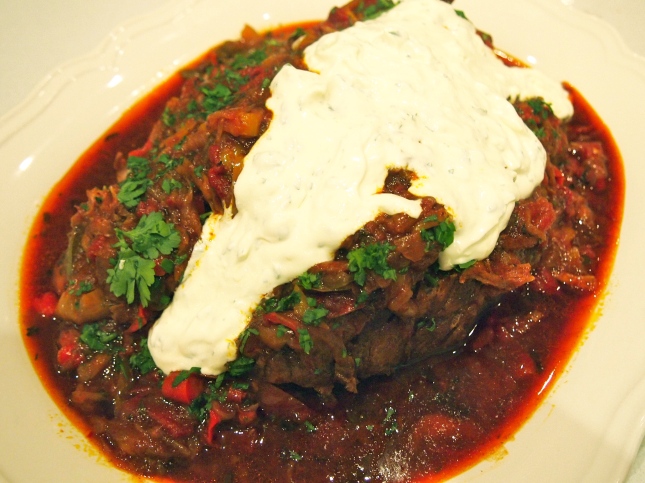 One thought on “Spicy Pork Goulash”