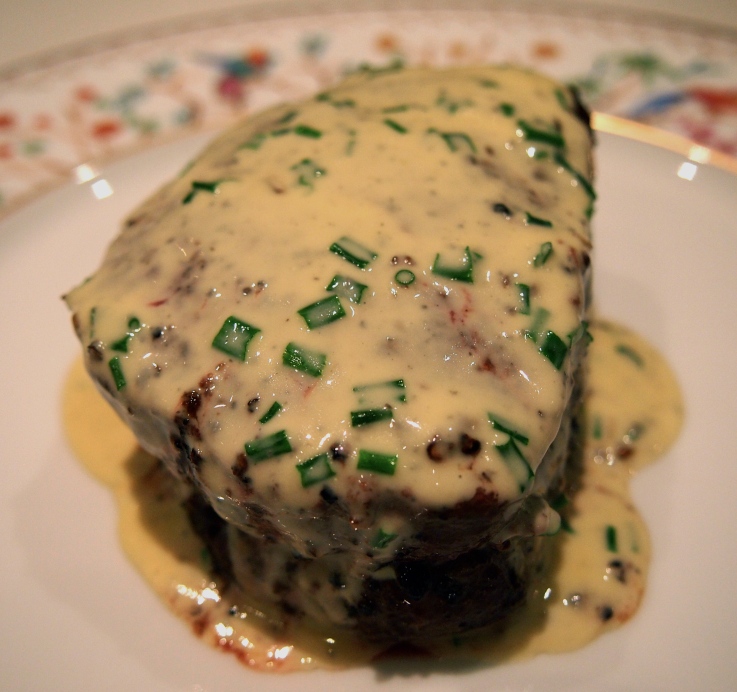 Fillet steak is not a cut I normally cook on the barbecue as I don’t think it’s delicate flavour holds up well to the grill.  So the other night when it was raining heavily and we felt like steaks for dinner I decided to make fillet steaks.  Ina Garten has a fail proof method of cooking thick cut fillet steaks to perfection.  She starts them on the stove top and cooks the steaks until they’re well browned on both sides than tops each fillet with a knob of butter and places them in a hot oven for around 8 minutes and they come out juicy and perfectly medium-rare.  The topping of blue cheese sauce is amazing and in some ways I wish I hadn’t tried it as it’s something I know I’m going to crave more often than is good for me.

Preheat the oven to 200C. Heat a well-seasoned cast iron skillet or heavy bottomed non stick frypan that is oven proof, over high heat until very hot. Pat the steaks dry with a paper towel and brush them lightly with vegetable oil. Combine the salt and cracked pepper on a plate and roll the steaks in the mixture, pressing lightly to evenly coat all sides. When the skillet is ready, add the steaks and sear them evenly on all sides for about 2 minutes per side. Top each steak with a tablespoon of butter and place the skillet in the oven. Cook the steaks for about 8 minutes for medium rare.  An instant read thermometer should read 55C (125F). Remove the steaks to a serving platter, cover tightly with aluminum foil and allow to rest at room temperature for 10 minutes. 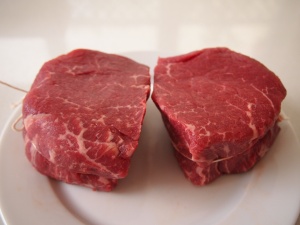 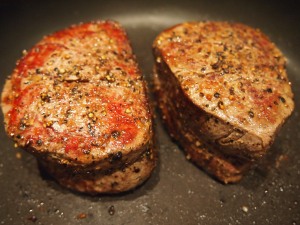 To make the blue cheese sauce, bring the cream to a boil in a small heavy-bottomed saucepan over medium-high heat. Cook at a low boil, stirring occasionally, until the mixture has become thick, about 10 minutes. Remove the pan from the heat, add the cheese, salt, pepper and chives and whisk rapidly until the cheese melts. Serve the steaks topped with the hot blue cheese sauce. 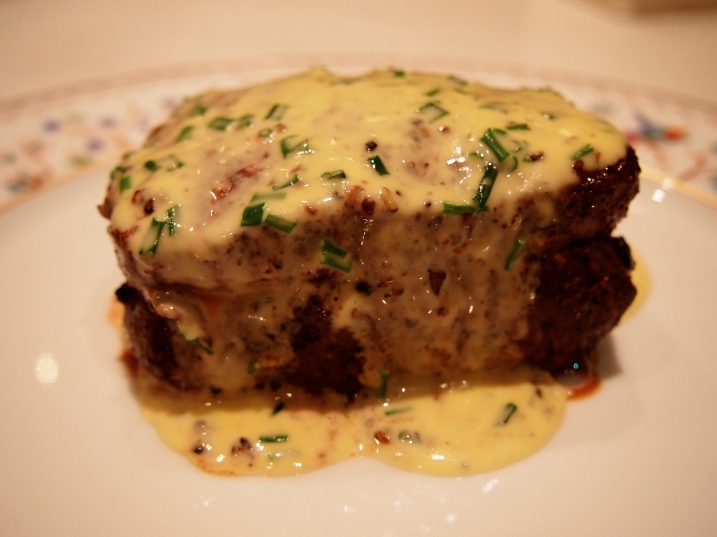