It’s rare for me to make Japanese food at home on a regular basis as it’s a cuisine that we prefer to go out for, so this being the second Japanese recipe in just over a week is pretty unusual. But there are, in my opinion, two types of Japanese cuisine; the highly technical food such as perfectly prepared sushi, sashimi and tempura – which can all take years of training to perfect, and then there’s the more home style of Japanese cooking, the sort of food that I imagine the average family sitting down to during the week such as this and this. This home style of cooking is the Japanese food that I like to make and these gyoza’s are a good example. They are normally filled with pork but as I was cooking for pork averse diners I substituted lean minced lamb which worked wonderfully so I’m sure beef or even chicken would also work well. These dumplings make a great appetiser and I find them much less daunting than Chinese dumplings. It’s so easy to pan fry them on just the one side and then add water and let them steam in the the same frypan with the lid on. No large steamers with fears of dumplings sticking to the bottom and worries about doneness here. The combination of a slightly crispy exterior on one side and steamed pastry on the other makes these very moreish. Serve with a simple dipping sauce of soy, rice wine vinegar and sesame oil.

Method
Place the cabbage and the salt in a large bowl and let it sit for 10 minutes. Using your hands squeeze the cabbage to drain the excess water. Add the lamb, ginger, garlic, spring onions, miso, sesame oil, chilli, and sugar. Mix everything together with your hands until very well combined. Then pick the mixture up and form it into a ball and throw it firmly back into the bowl. Do this several times to tenderise the mixture. 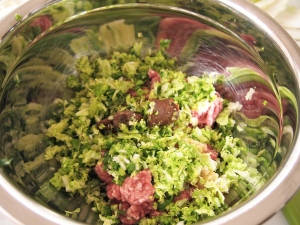 To form the gyoza lay a dumpling wrapper on a dry work surface, and place a heaping teaspoon of the meat mixture in the center of the wrapper. With a fingertip moistened with water, trace a line along half of the edge of the round wrapper. Fold the wrapper over to enclose the filling, and pinch the wrapper in the center to seal the edges together at that spot. Holding the filled half-circle, pleat the top of the wrapper in the middle, then working from the middle make small pleats going form the centre out on both sides. You should have 5-6 pleats in total. Place the dumplings on a tray lined with baking paper and repeat with the remaining mixture. At this point the dumplings can be covered and refrigerated until you’re ready to cook them. 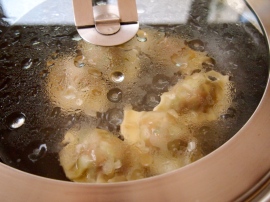 To cook, bring the dumplings to room temperature and place a non stick frypan which has a lid over medium heat. Add 2 tablespoons of the vegetable oil  and when hot place as many of the dumplings that can fit in the pan – should be about half the dumplings (in the picture above I only cooked 6 of the dumplings and froze the rest). Cook the dumplings for a few minutes, or until nicely browned on the bottom. Once the bottoms are browned pour in  ¼ cup of the water. When the hissing and splattering dies down, drizzle in ½ teaspoon of sesame oil around the edge of the pan. Place the lid on the pan to trap in the moisture and lower the heat to keep the liquid at a bare simmer. Check the dumplings after 2-3 minutes. When the wrappers appear slightly translucent and the meat feels firm when pressed lightly with a spoon, remove the lid and raise the heat slightly. Continue to cook until all the water has evaporated and only the oil remains (about another 2 minutes). Once you hear a sizzling sound, shake the pan. The dumplings should slide about. If they seem to stick, move the pan away from the stove and replace the lid for a moment. Remove the dumplings to a platter and cook the remaining dumplings the same way. While the dumplings are cooking, make the dipping sauce by mixing all the ingredients in a small bowl. Serve the dumplings hot accompanied by the dipping sauce. 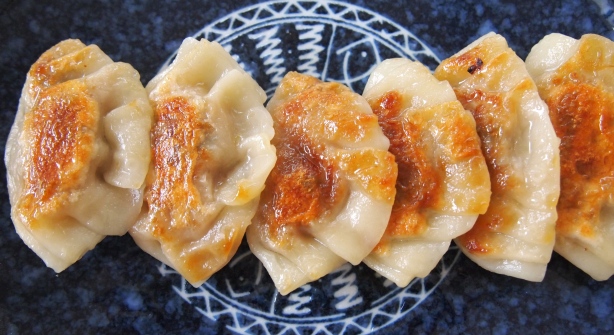