A Baked & Glazed Ham for Christmas

Baked ham is somewhat of a new addition to our Christmas table. I only started making it a few years ago when my husband received a gift of a beautiful organic picnic ham, and I’ve been addicted ever since. There are so many recipes out there for baked ham, with all different kinds of glazes and I did a lot of searching before finally settling on this stellar one from a friend’s sister. I made a few adjustments to the glaze but the basis of the recipe, and what makes it really stand out, is that the ham is first steamed (in the oven so not difficult at all) which makes all the diamond crescents that you’ve scored into the fat open up slightly allowing the glaze to really penetrate the ham. Oh and that glaze – thick, sweet, sticky and baked into to the fat to create a beautiful burnished topping. It’s utterly delicious especially eaten warm, straight out of the oven. 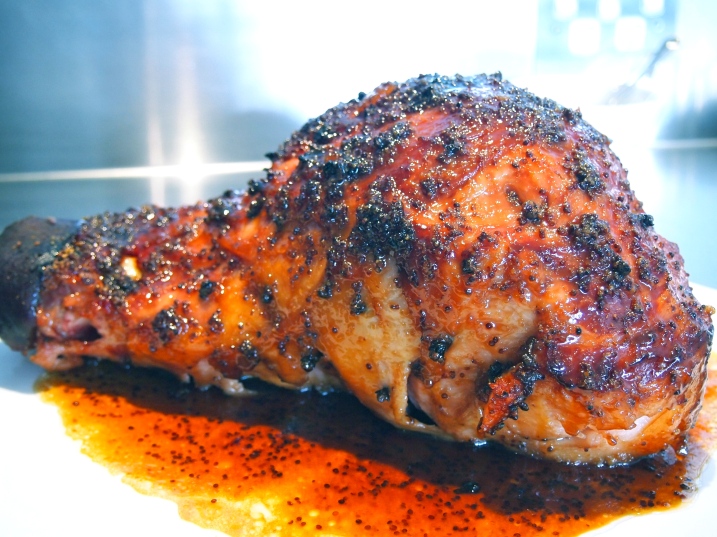 For me, one of nicest things about baking a ham is that for the next few days we have lots of leftover ham to cook up with eggs for breakfast, toasted sandwiches at lunch time and best of all a Thomas Keller inspired ham and pasta gratin which is comfort food nirvana. When all the ham has gone the hock gets used in a soup, believe me there is very little wasted. In fact one year I used the skin, which is normally discarded, to cover the turkey whilst it roasted to keep it moist, a trick I learned from a catering friend. So now Christmas for me just wouldn’t be the same without this baked ham, I just wish I’d discovered it earlier!

A Note on the ham: in Australia ham is sold already cooked and smoked so the baking and glazing is just to warm the ham through. In countries where the ham is cold smoked, like the UK, you will need to cook your ham first and then proceed with the glazing process. I like to use a picnic ham, which is smaller than a whole leg (approx 5 kgs) and easier to carve. You can of course use a whole leg – just double the glaze ingredients and increase the baking time slightly.

Preheat oven to 180C. To prepare ham, gently remove the skin leaving as much fat on as possible. This easiest way to do this is to insert your fingers under the edge of the skin and work it gently back. Lightly score the fat in a diamond pattern (making sure you don’t penetrate the flesh) and insert a clove in the centre of each diamond.

Place ham, fat side up in a roasting dish on a rack and pour 2-3cm of boiling water in the bottom of the pan. Cover the dish with some tented foil and place in the oven for 25 minutes. This will open the scoring and allow the glaze to penetrate into the ham. Take the ham out of the oven and remove the foil.

To glaze the ham, mix all the remaining ingredients in a bowl. Spread a quarter of the mixture all over the scored fat. Bake the ham, uncovered, for a total of 1 – 1½ hours basting every 15-20 minutes until the ham is a lovely dark golden colour. Remove from the oven and slice the ham thinly making sure that each piece has a little of the fat and glaze. The ham can be served hot or cold but we love it hot from the oven.