The iconic date tart served at legendary Sydney restaurant Rockpool was originally created by Lorraine Godsmark and whilst Lorraine has long since departed Rockpool to start her own Patisserie (where she also sells this date tart) it’s still on the menu at Rockpool and I couldn’t imagine ending a meal there without it. There’s a good reason why this tart has gained such culinary cult status – it’s unbelievably delicious and if you’ve ever tasted it you’ll know that it’s one very special tart. Trying to fathom the recipe is no easy feat as it’s a closely guarded secret and whilst this version may not be the exact recipe Lorraine created it’s pretty darn close. The list of ingredients and the concept is pretty simple but I think the real trick is in the cooking time and temperature. In order to achieve the incredibly silky, just set custard, of the original you need to really monitor the oven heat. After various attempts I found that starting in a pre-heated oven at 180C and then lowering the temperature by 10 degrees every 10 minutes produced the best results. The one thing you don’t want to do is to overcook it or cook it at too fierce a heat. It should be taken out of the oven whilst it’s still wobbly in the centre as it continues to firm as it cools. This tart is prefect on its own and doesn’t need any accompaniments but if you need to make the tart stretch out to feed a large number of people, like I did a few weeks ago, then I can highly recommend pairing it with coffee ice cream – I made a batch using a David Lebovitz recipe and it was amazing, I’ll post the recipe shortly.

Pastry – this makes slightly more pastry than you need for a 28cm tart shell but you can freeze the leftovers or turn them into cookies
270 g cold butter, cut into cubes
35g caster sugar
1 large egg, beaten
2 tablespoons milk
375g plain flour, sifted
Pinch of salt

To make the pastry, place the butter, sugar, egg and milk in a food processor and pulse until the butter is in small pieces, then add the flour and process until the pastry just comes together. Remove from the processor onto a lightly floured surface and bring together into a ball. Shape the dough into a disc, wrap in cling film and refrigerate for 15 minutes.

Preheat the oven to 200C. Roll out the dough on a floured surface or between 2 sheets of baking paper until large enough to fit a 28cm tart tin. Place the pastry into the tin and lightly press it in to the base and sides. Trim off any excess and refrigerate for at least 30 minutes. I often make the pastry a day or two in advance and place it covered in cling wrap in the freezer. Once the dough has rested in the fridge, cover it with some baking paper and fill with pastry weights or rice and bake for 15 minutes. Remove the paper and weights and bake for a further 10-12 minutes until the pastry is lightly golden. Set aside to cool.

To make the filling, Place the halves of the dates around the perimeter and centre of the pastry.   Press the dates down so they squash a little to ensure they don’t poke out of the custard later.

Pre-heat oven to 180C. Use an electric beater or stand mixer to cream together the egg yolks and sugar until pale and fluffy. Add the cream and vanilla and beat to combine. Pour the filling into the tart, making sure the dates are covered. I find it easier to place the tart on a baking sheet in the oven and the pour in the filling. Make sure you don’t let the filling over flow. 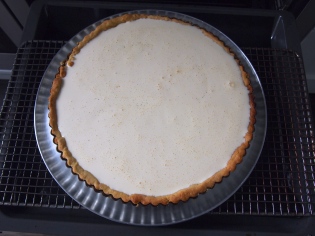 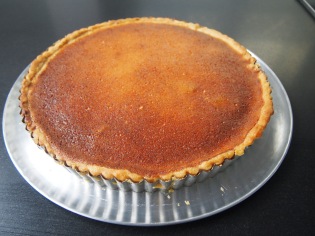 Bake for a total of 30-40  minutes, reducing the oven temperature by 10 degrees every 10 minutes until the tart is golden brown but still has a slight wobble in the centre, it will become firmer as it cools and it’s important not to over cook the filling. If you feel that it needs more time it’s safer to turn the oven off and leave it in the oven for a little extra time. Allow to come to room temperature before serving. 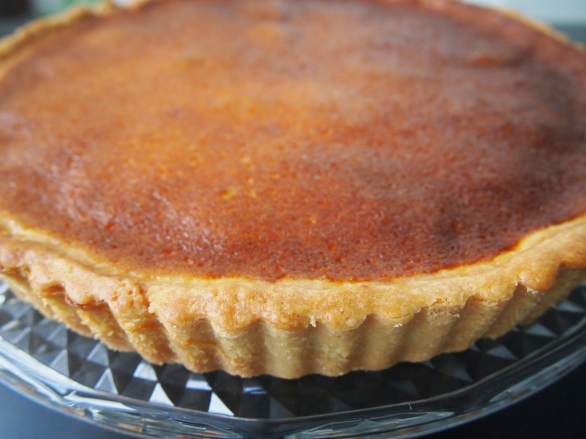