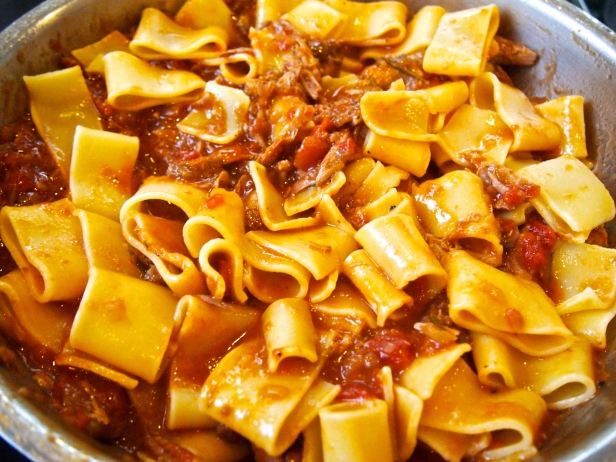 I was recently watching Rick Stein’s television series, From Venice to Istanbul, and it really struck me how different the cooking of this section of the Veneto region is to the rest of Italy. The use of spices such as cinnamon and curry powder bring to the cuisine a real hint of its Byzantine past. This duck ragu, which is not a Rick Stein recipe by the way, is a great example where the cinnamon adds depth and complexity to a slow cooked sauce.

I love duck and it’s such a shame that people are either a little intimidated to cook with it or think it’s unhealthy. In fact, duck is very hard to get wrong as it will rarely dry out, especially the legs as in this recipe and duck fat is far better for you (as is butter) than those horrid hydrogenated vegetable oils. So if you see some duck legs sitting on your supermarket shelf this weekend grab them and try this very simple and delicious ragu.

Ingredients – Serves 6 (I halved the recipe)

Heat the oil in a heavy bottomed pan which has a lid. Season the duck legs with salt and pepper Add them to the pan and cook on all sides for about 10 minutes or until nicely browned. Remove to a plate and set aside. Add the onions to the pan along with a pinch of salt and cook for until softened. Add the garlic and cook for a further minute, then stir in the cinnamon and flour and cook for a another minute. Return the duck to the pan, add the wine, tomatoes, stock, herbs, sugar and seasoning. Bring to a simmer, then lower the heat, cover with a lid and cook for two hours, stirring every now and then. 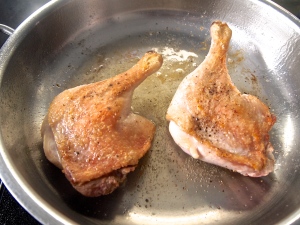 Carefully lift the duck legs out of the sauce and place on a plate – they will be very tender so try not to lose any of the meat. Pull off and discard the fat, then shred the meat with two forks and discard the bones. Add the meat back to the sauce and check the seasoning, then add the milk and simmer, uncovered, for a further 10-15 minutes while you cook the pasta. 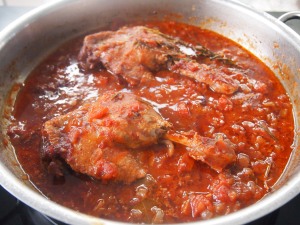 Cook the pasta following package instructions, then drain, reserving a cup of the pasta water, and add the pasta to the ragu. Stir to coat all the pasta in the sauce and cook for 1 minute more, adding a splash of pasta water if it looks dry. Serve with grated Parmesan.