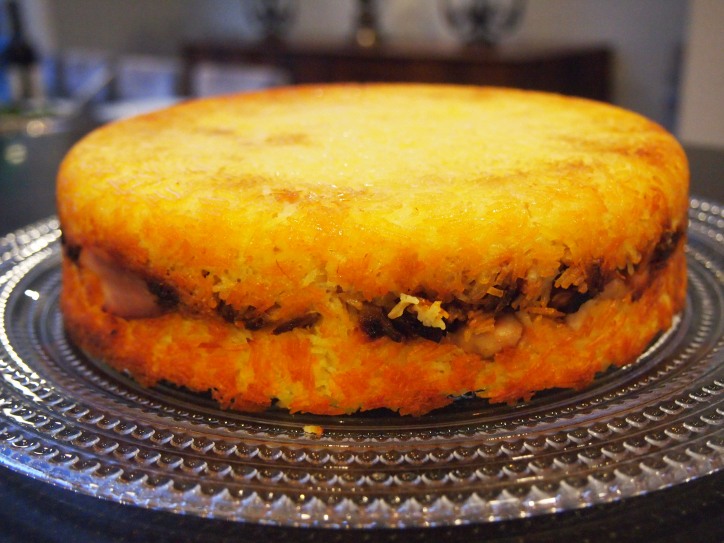 Tahchin is a much loved Persian comfort food but despite it’s popularity and wonderful flavour it’s a recipe a lot of people tend to steer away from as it’s perceived as being difficult to execute well. This is however not at all true and tahchin, I believe, is one of the easier Persian recipes to master. One of the best things about a well made tahchin is the wonderful crunchy crust that encases the rice and chicken, and it’s achieving this golden crust that seems to scare most people off, but even if the crust doesn’t come out quite as crunchy or golden as you would like the taste and flavours of the chicken, yogurt and saffron rice will still be sublime. There’s no real secret to making a great tahchin and a successful outcome has as much to do with method as it does about the cooking vessel used. I prefer to use a deep metal, non-stick, cake tin (not spring form) or a two handled heavy bottomed non-stick pot that is not too deep or too wide. I know a lot of cooks who favour pyrex dishes but I have found you’re more likely to achieve crunchy tahdig-heaven using a metal dish.

Place the chicken marylands into a saucepan along with the carrot and roughly chopped onion and 2 teaspoons of salt.  Add enough cold water to just cover the chicken. Bring to a boil over medium heat, skimming any scum from the surface. Lower the heat to a gentle simmer and cook partially covered for an hour, Once cooked remove the chicken, reserving the stock. When the chicken is cool enough to handle remove the meat from the bones, discarding the skin and shred into large chunks. 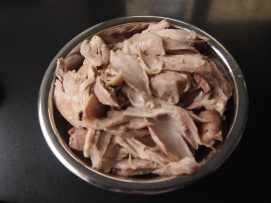 Whilst the chicken is cooking, bring a good size pot of salted water to the boil. Drain the soaked rice and add to the boiling water. Cook, stirring gently, for about 8-10 minutes, or until the rice is almost cooked through but still has a little bite to it. Drain the rice in a fine meshed colander and gently rinse with a little cold water to stop the rice from continuing to cook. Set aside.

Heat a generous amount of oil or ghee in a frypan and cook the onions along with a pinch of salt until they are golden brown and caramelised. Set aside. In the same pan melt a tablespoon of butter and gently saute the barberries with the sugar for a few minutes, set aside. Beat the egg yolks with the saffron liquid then add the yogurt, along with 1 tablespoon of melted butter and a pinch of salt and mix well. Place the rice in a large bowl and add the yogurt mixture and mix throughly but gently until well combined. 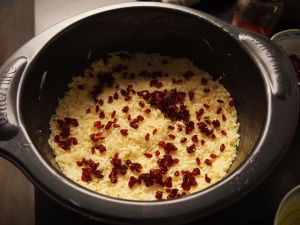 Heat the oven to 200C. Butter or oil your cooking vessel well – as stated above I prefer a metal non-stick dish and in this instance I used a cake tin (not spring form). You could also use a deep skillet or a pyrex casserole dish. Add half the rice mixture to the tin. Even it out and press down firmly. sprinkle with half the barberries. Mix the chicken meat with the caramelised onions and a few tablespoons of the reserved chicken stock. Place the chicken mixture evenly on top of the rice. Spread remaining rice on top of the chicken. Again press down firmly. Sprinkle over the rest of the barberries. Cover with foil and bake for 20 minutes. Lower heat to 160C and cook for a further hour. Remove from the oven and let it sit undisturbed for 10 minutes before removing the foil and inverting the tahchin onto a large plate. Serve by cutting into wedges. 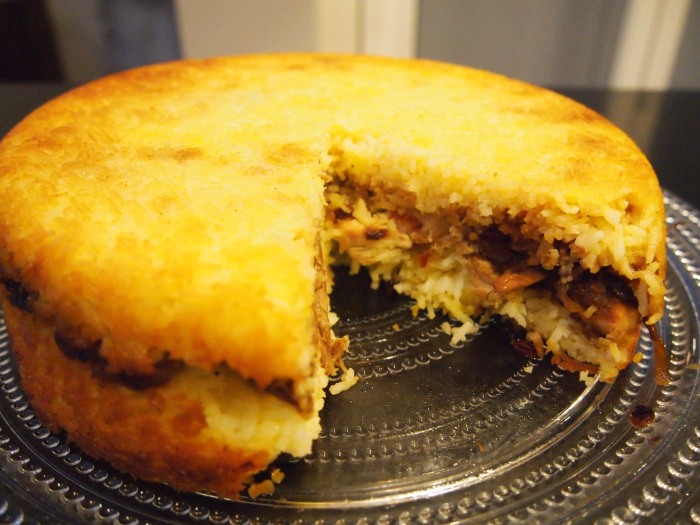